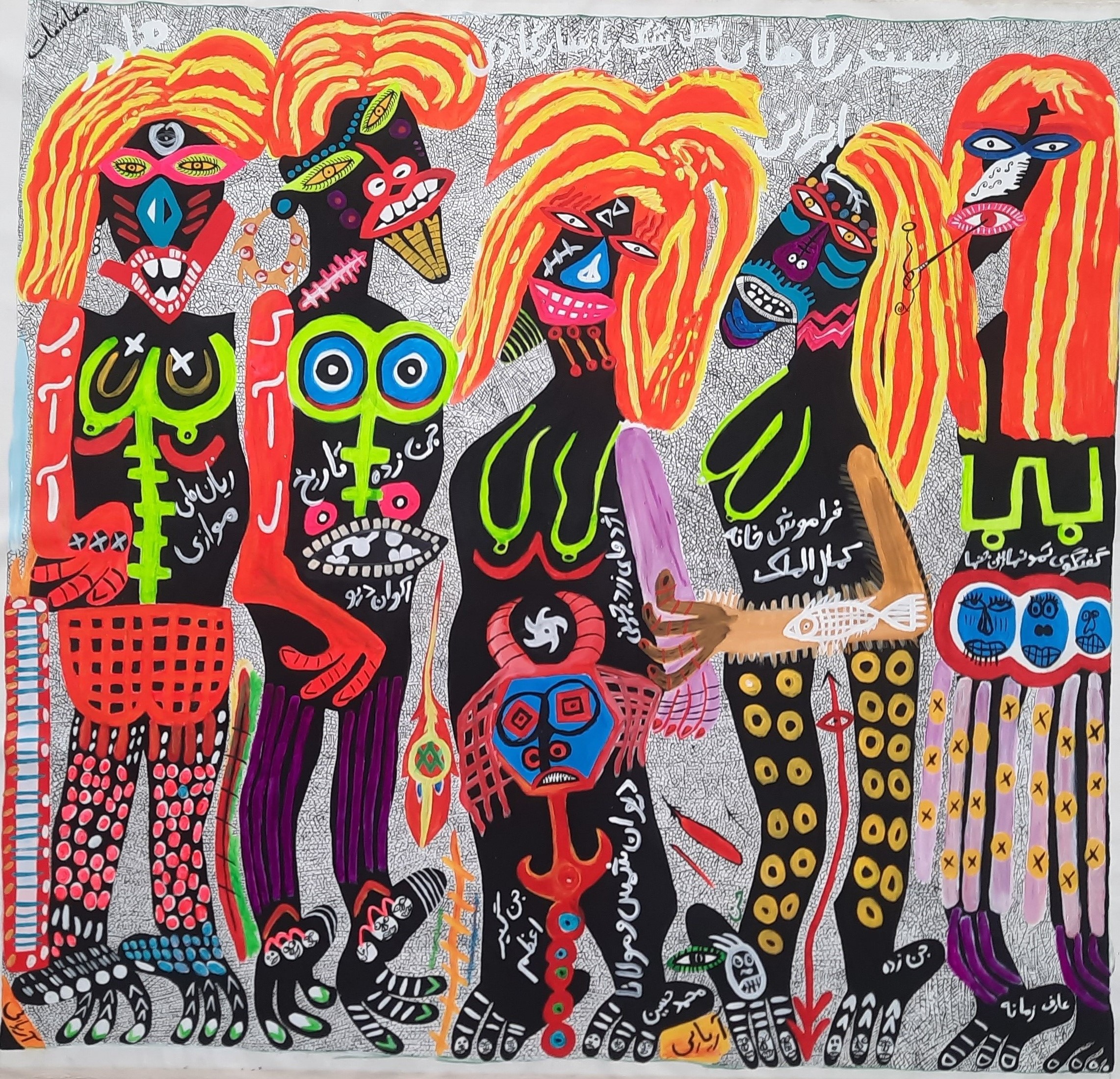 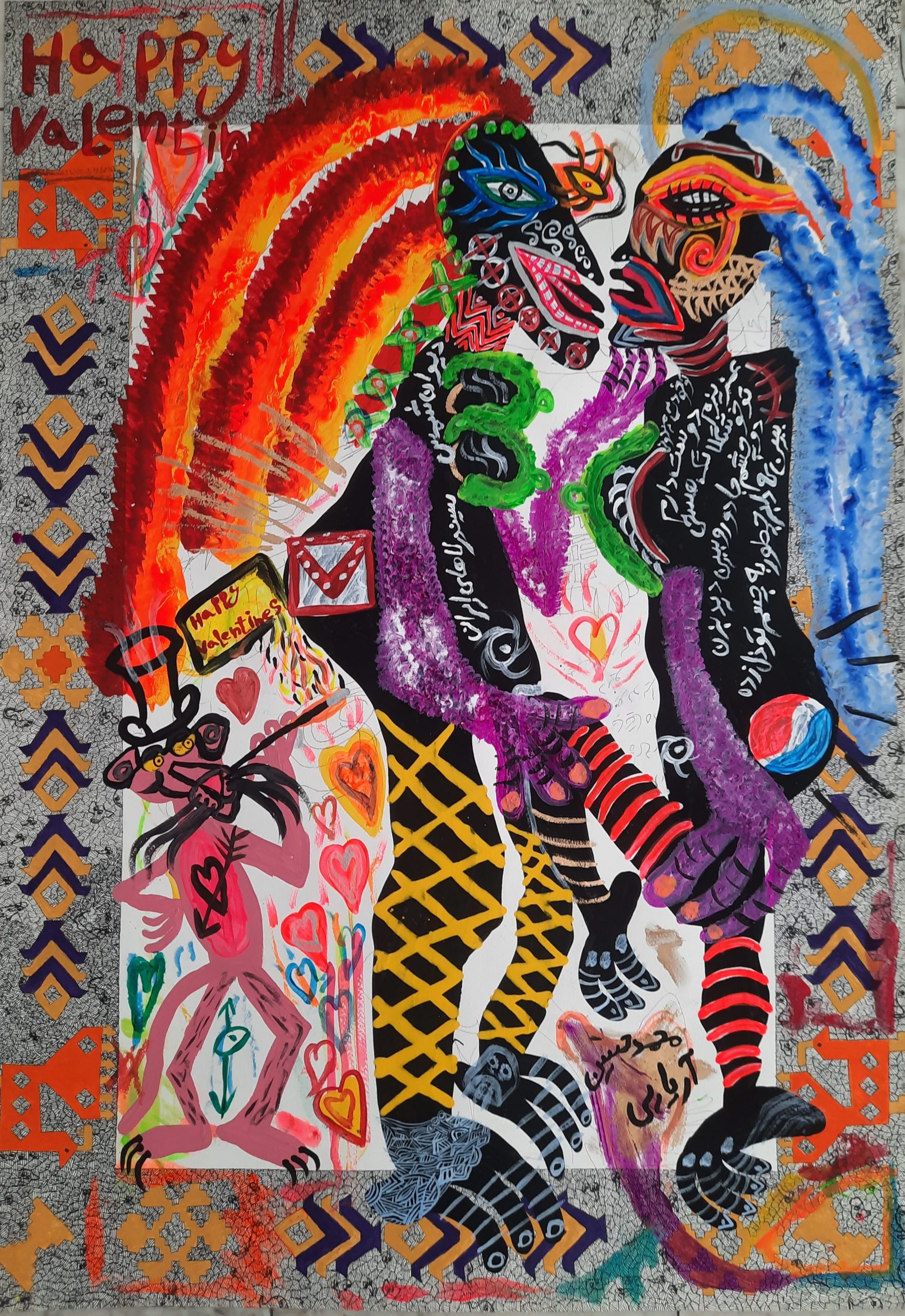 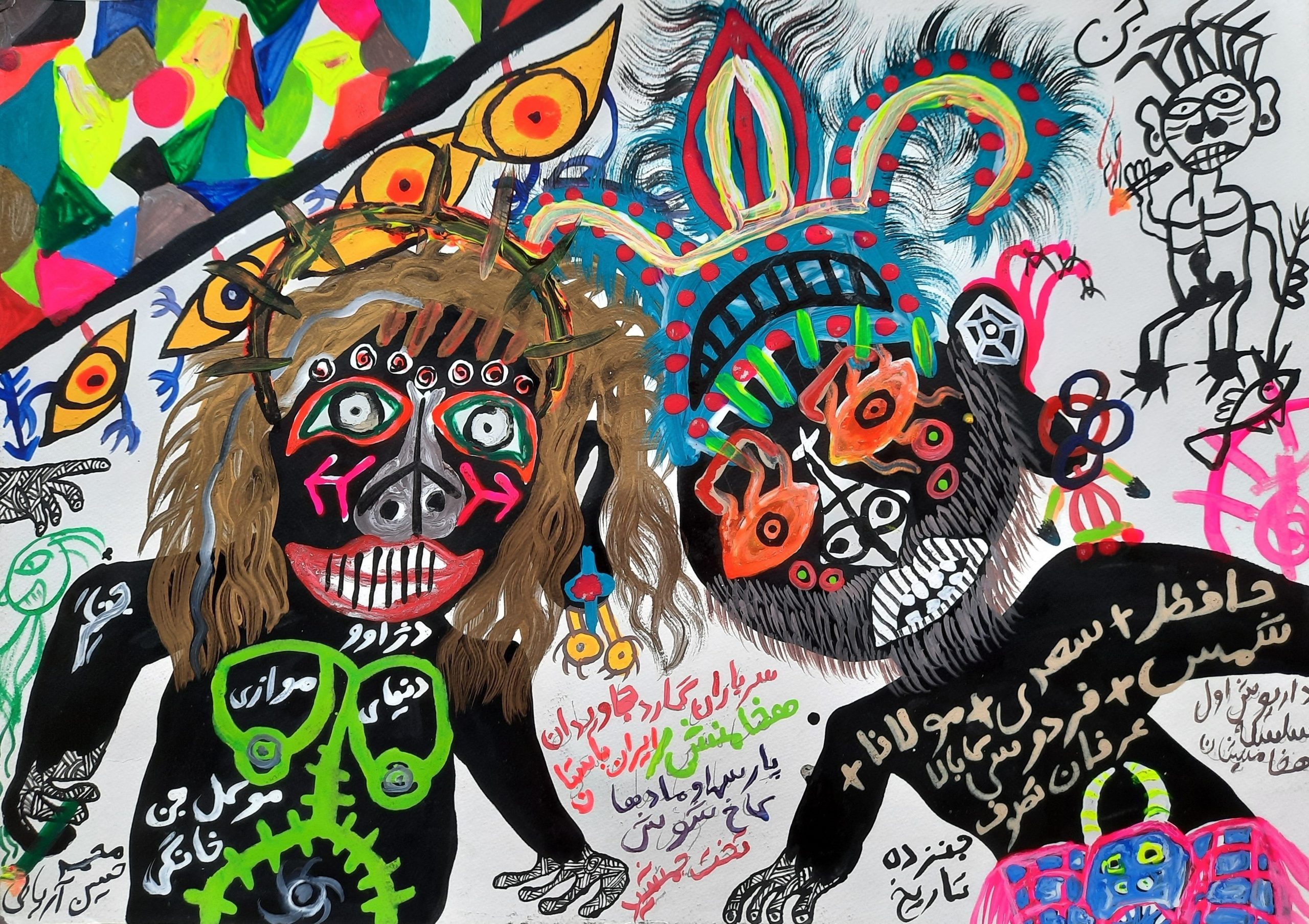 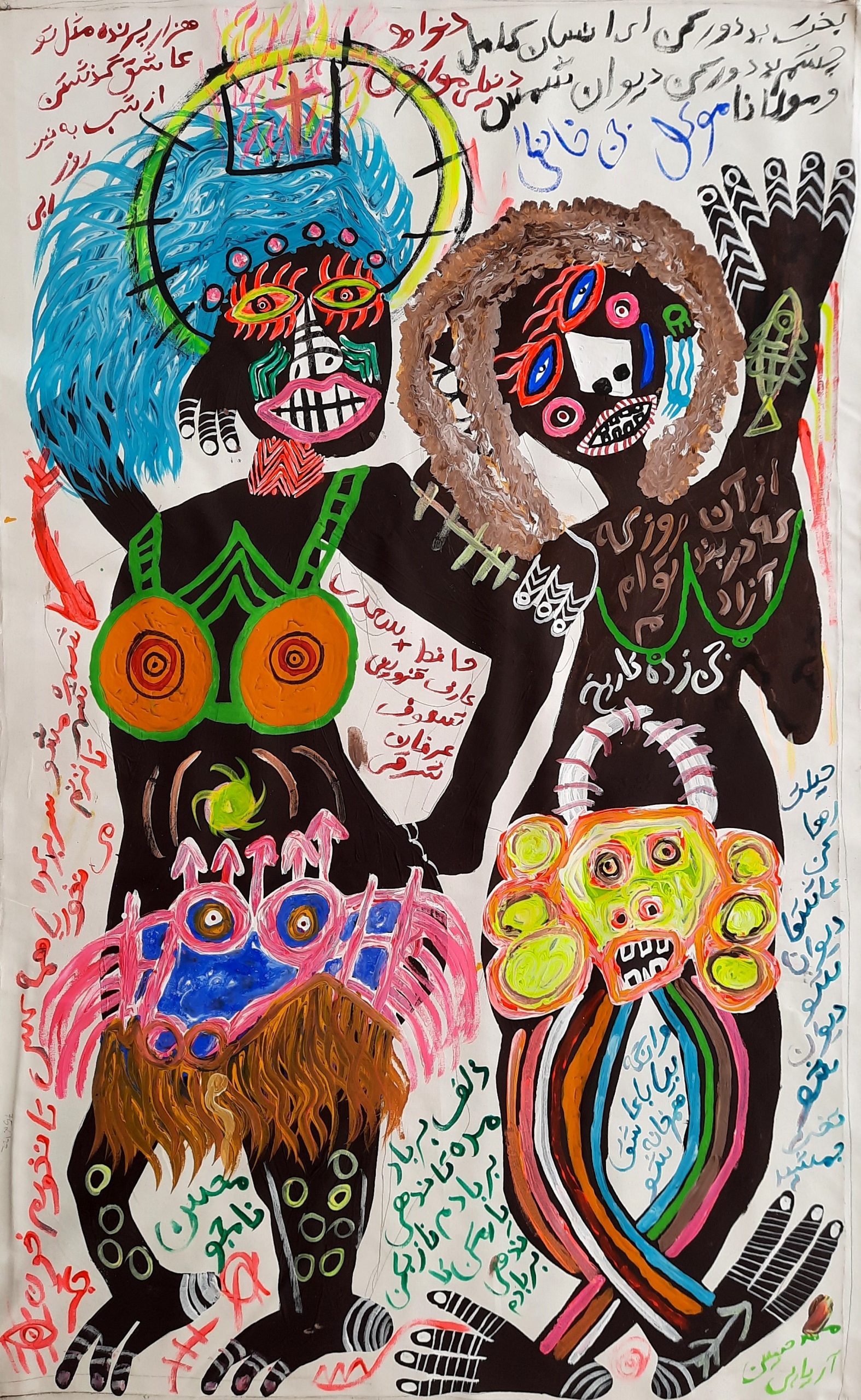 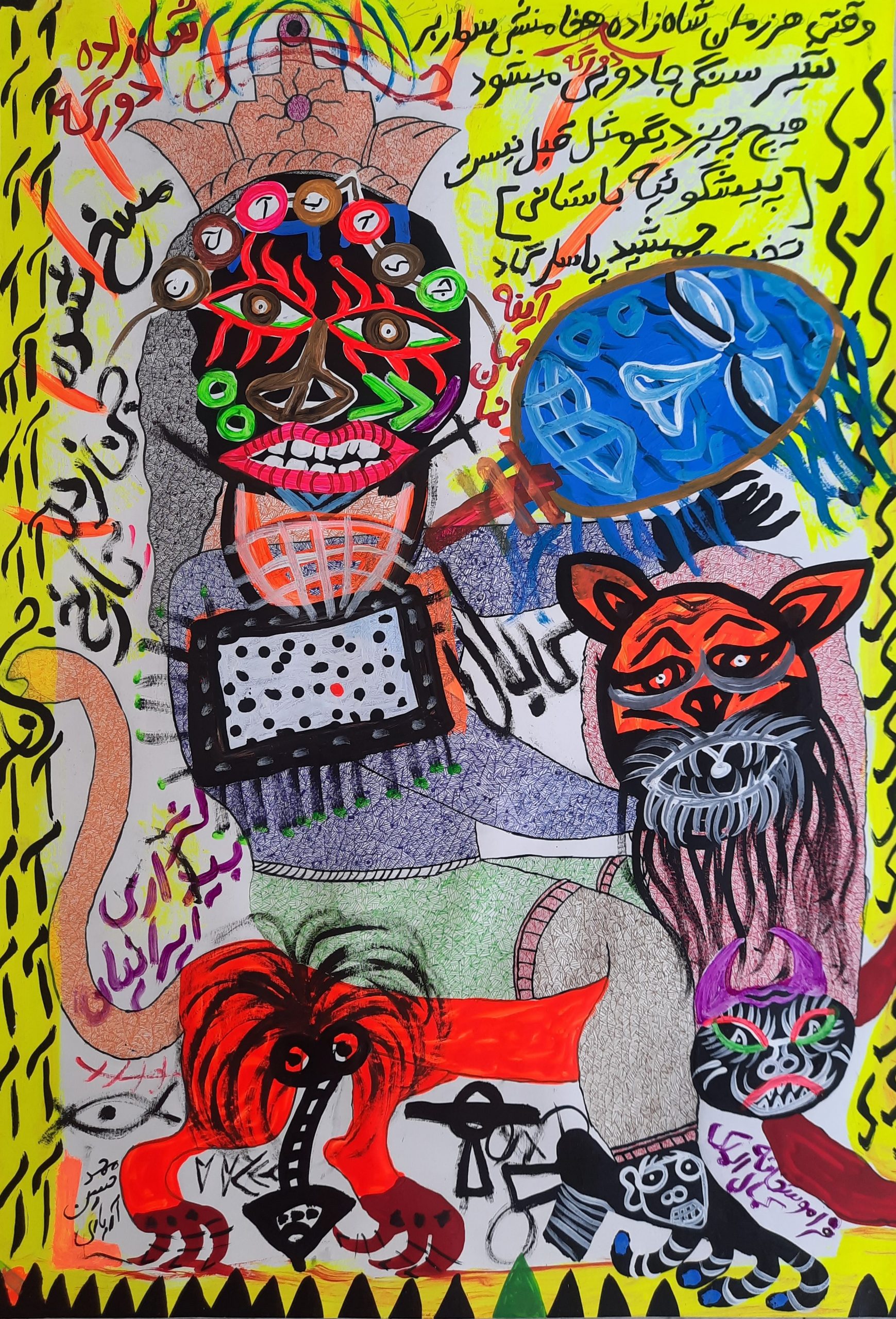 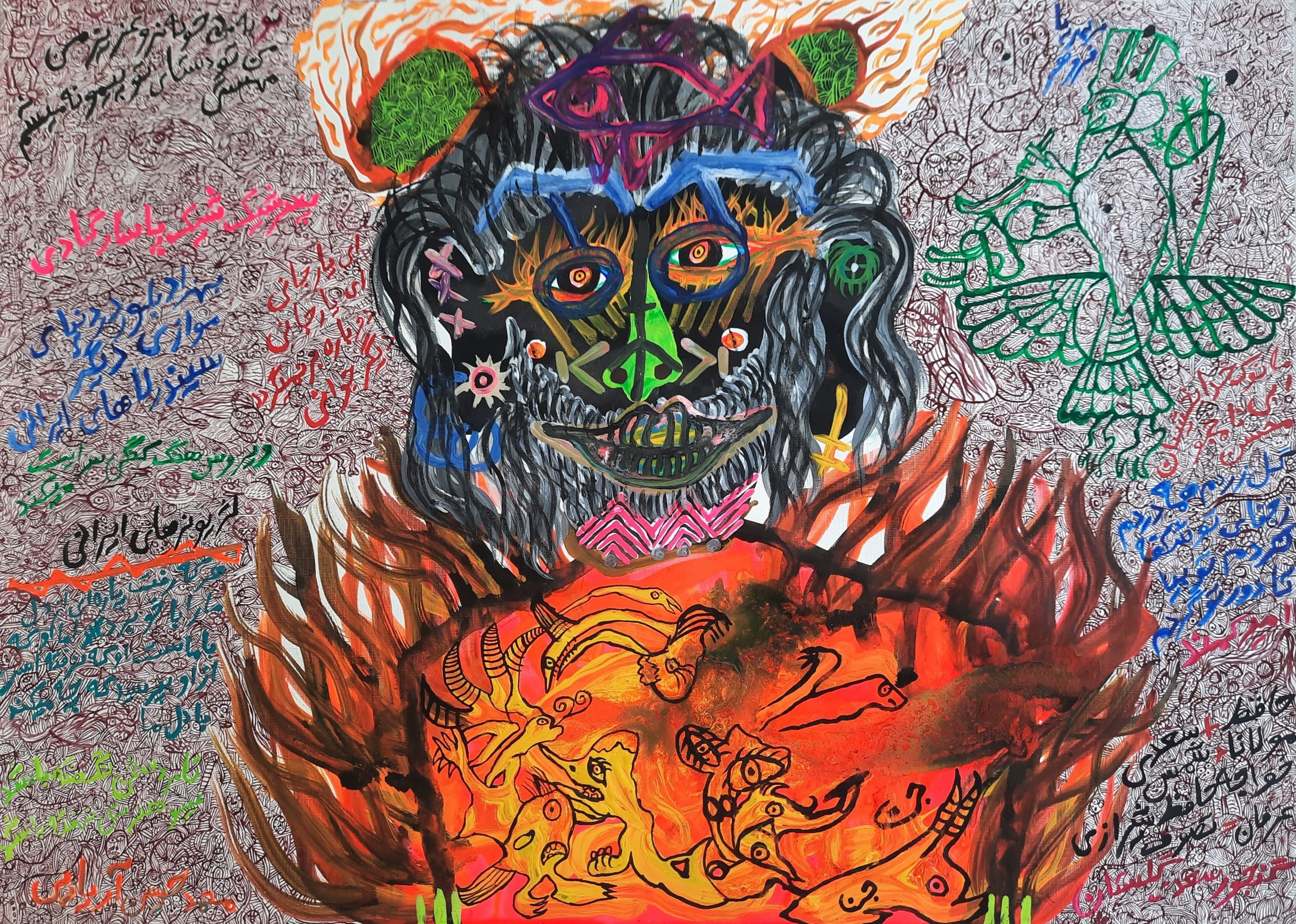 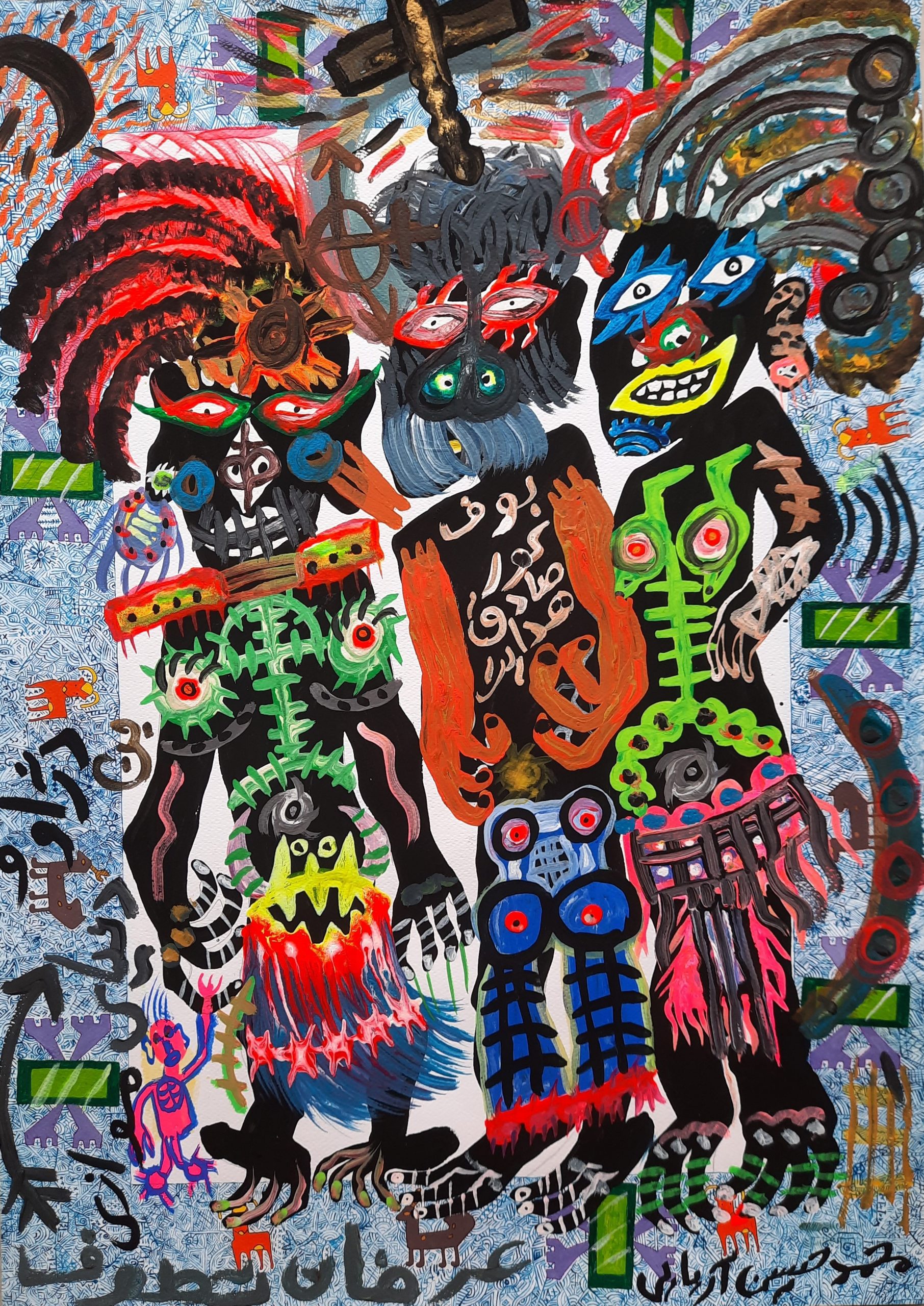 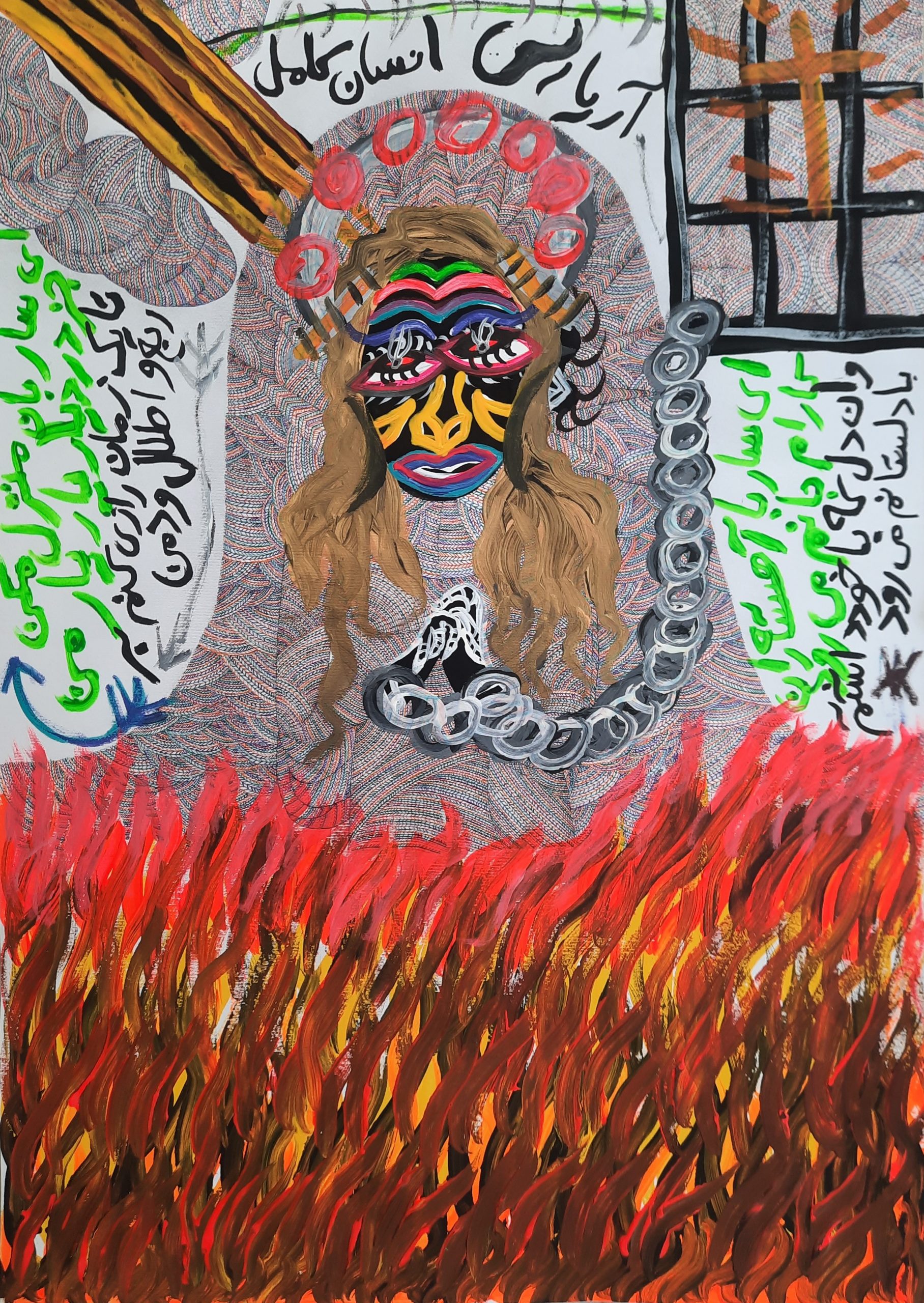 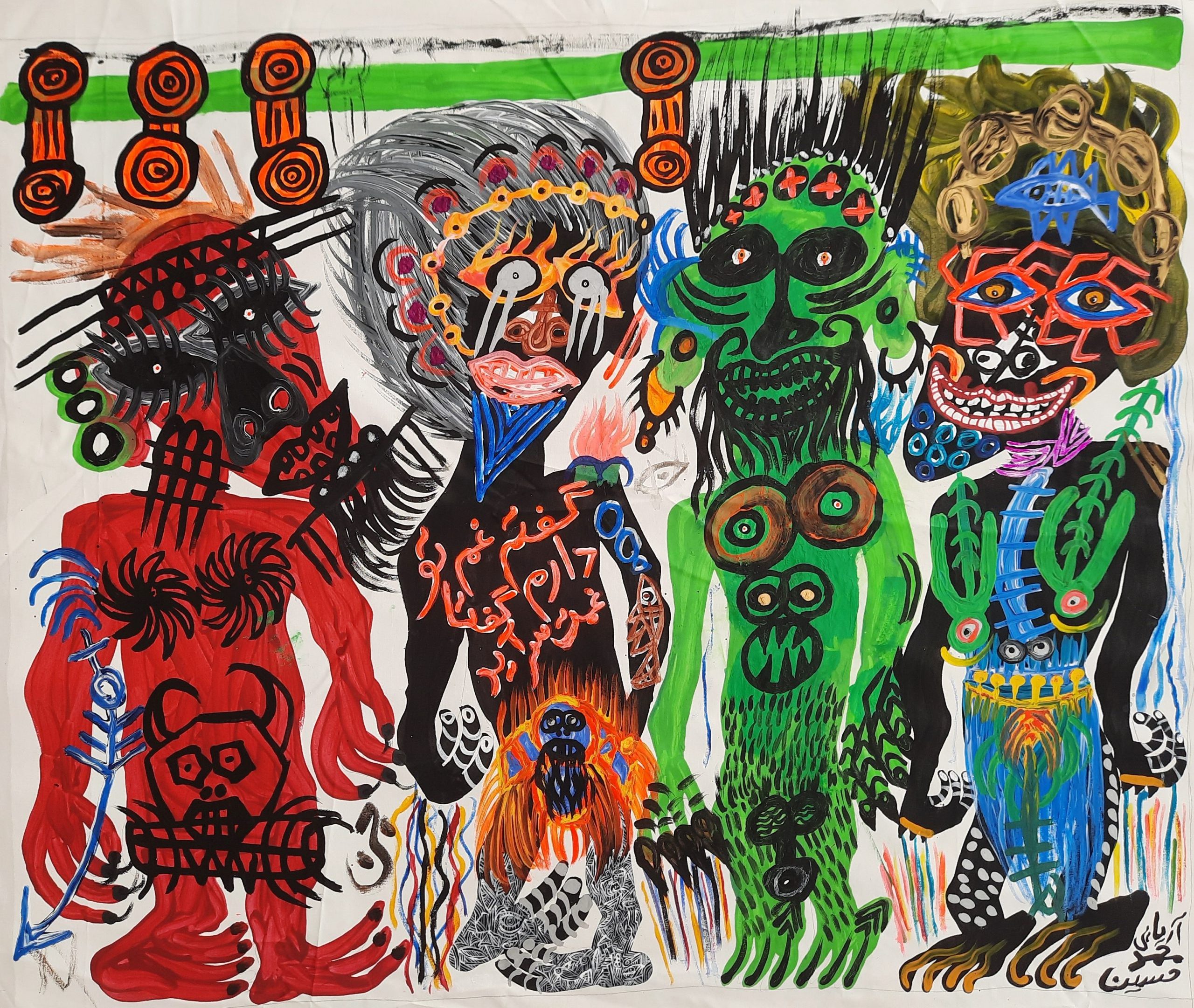 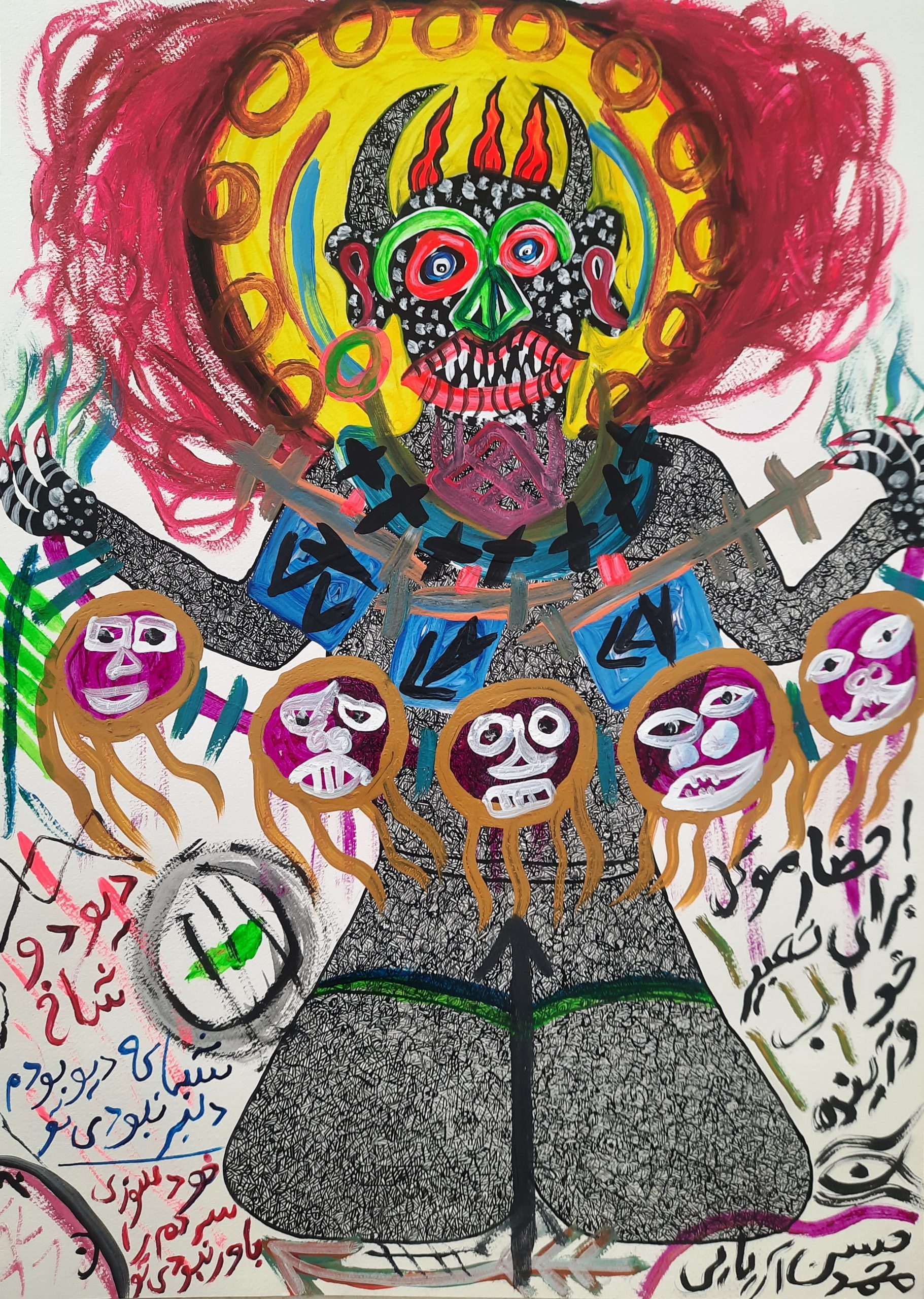 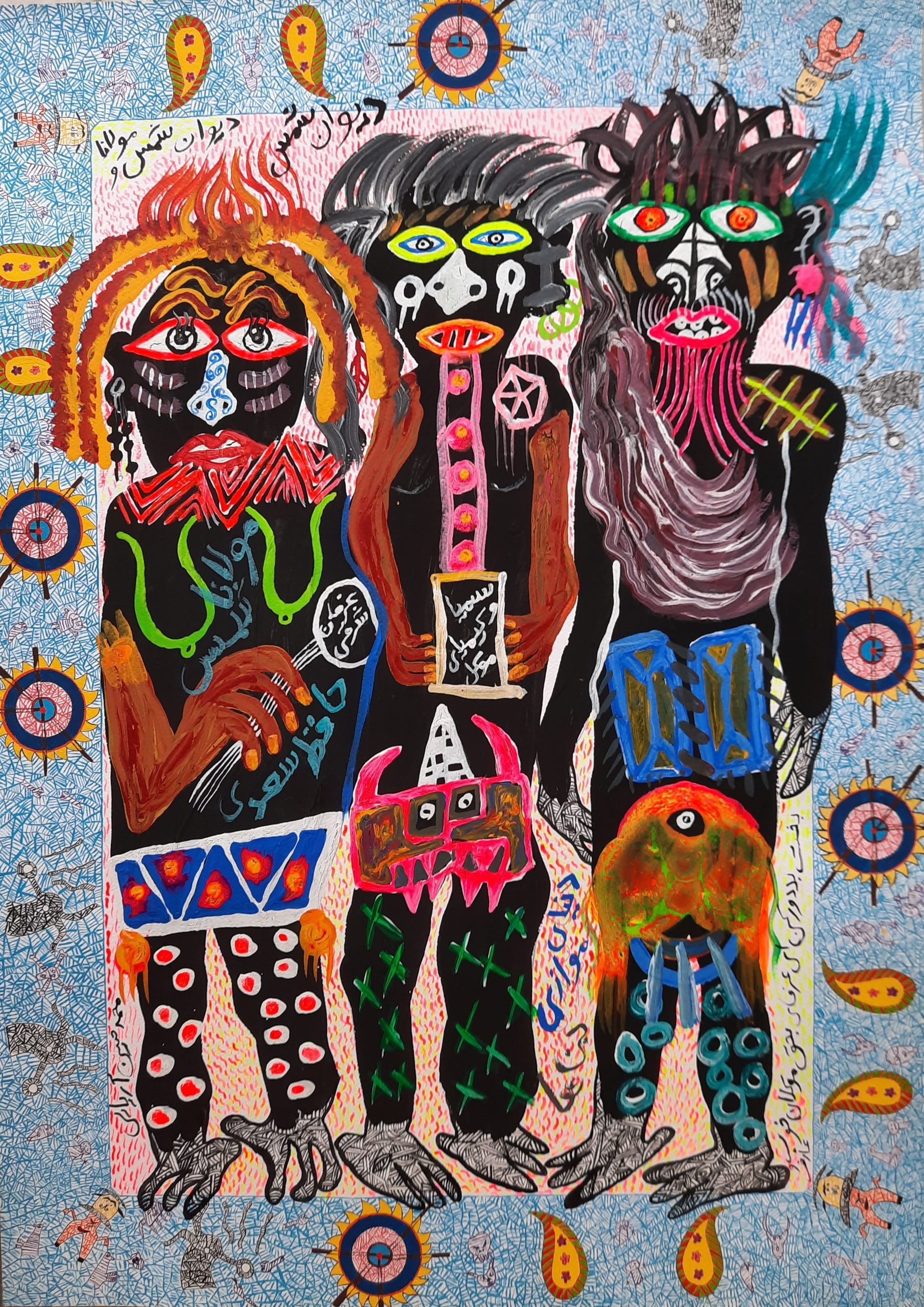 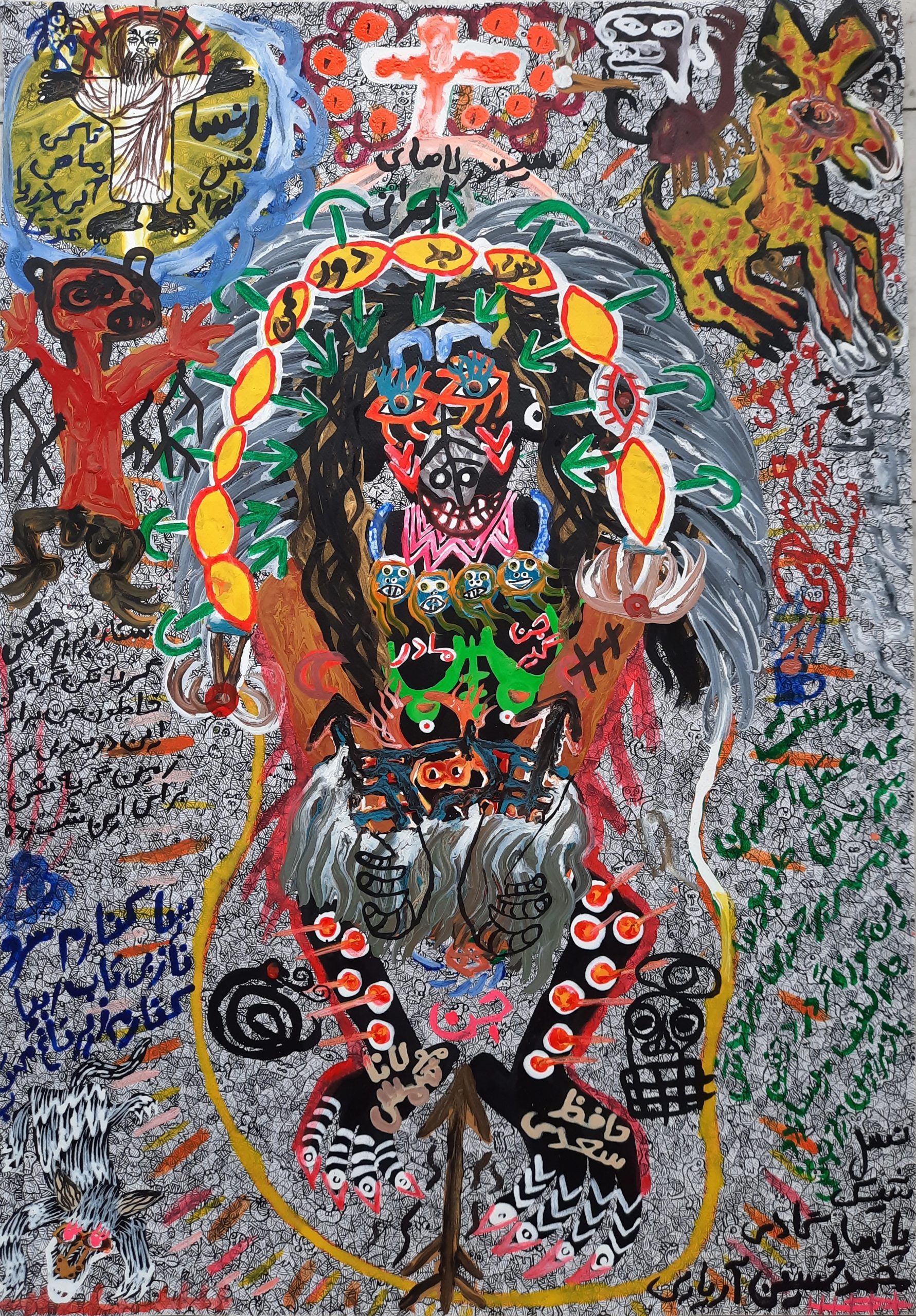 Mohammad Ariyaei was born in 1987 in Ispahan, Iran.

He grew up with his grand-mother who practised Sufism and mysticism through the writing of prayers, dialogue with parallel worlds and exorcism. She told him many stories that will develop his imagination and nourish his artistic inspiration later on.

In 2013, he started painting on the advice of a children’s book illustrator. Being a self-taught artist, he never stopped painting since then.

It is an ode to vital energy and to appetite for life. It is also a testimony of the culture he is the depositary through the women of his lineage. Indeed, his great great grandmother was part of the Awakening Lodge 100 years ago in Iran and she delivered her knowledge on Sufism and mysticism to her daughters from generation to generation until today. Mohammad Ariyaei is thus the first man in his family to hold this knowledge and reveal it in his paintings.

His works are incandescent. They stand at the heart of an uninhibited, humorous and spirited outsider figuration, at the crossroads of the East and the West. He mixes Persian poetry and literature, human beings and animals. He summons Persian poets and philosophers in person such as Saadi, Roudaki, Ferdowsi, Khaghani, Hafez and the mystic Shams to the same table, beyond time and space, as if to reconcile the spirit of creation on his canvas and take advice from his illustrious predecessors.

The surface of the work is saturated with signs and cross references from the visual arts, poetry, literature and music. The vertical composition of some works reminds us of Japanese prints and the Japanese Theater filled with funny or tragic characters. Mohammad Ariyaei ‘s art is frantic as much as in the graphics mixing arabic text and image as in the energetic, fresh, intense and luminous colours. The emotion arises from the use of pure color singing with red, blue, orange and yellow hues applied with freedom and casualness. The freedom of the gesture appears in the slender features and the crazy hair of the characters. Arabic writings fly in every direction and participate in the overall graphic composition.

Mohammad Ariyaei’s work is a living score composed of a farandole of exuberant colors and skillfully orchestrated shapes and signs. His work is organically alive, noisy, as if lit up from within by color.

This extroverted art shows a powerfully controlled chaos, on the verge of explosion, just like its creator who is jovial but lucid in view of the current history of his country.

Like a cry of survival, he depicts the tragedies of human history, its questions, its wanderings, its absurdity. As an observer of his contemporaries, his works are nonetheless tinged with laughter to invite the viewer to rethink the world and take a distanced look at love, desire, betrayal, war and the injustice of men.

« Here the barbaric or savage ceremonies of New Guinea take on the air of Rio carnival.

Here the vitality bursts and the colors dance the jig while thundering.

It seems that within a kindergarten class, merry feathered wizards have joined together to cover the canvas or the paper with totemic figures strewn with the most inventively unexpected graffiti, in a creative frenzy so bubbling that the anarchy that threat recovers as in spite of itself a semblance of balance.

The graphic design performs an enveloping and virtuoso dance that passes from the most wisely academic exercise to the most exuberant and Dionysian lyrical expressionism.

Should we detect here any influence of the spirit of “outsider art”, today widespread worldwide?

Perhaps, but then it is undeniable that the personal temperament of Mohammad ARIYAEI carries everything and no longer owes anything to anyone.” 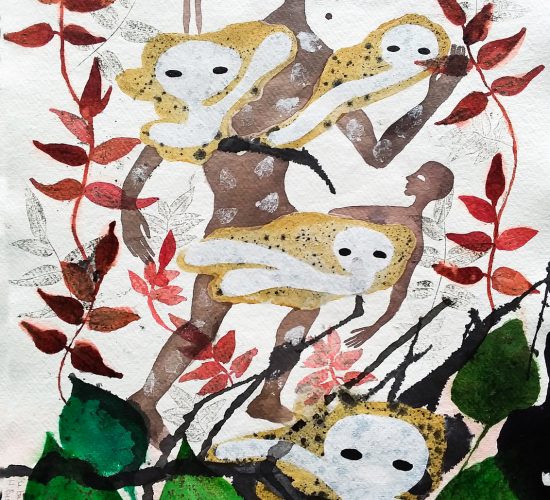